Direct response copy: why you should go old-school

One thing that struck me recently is how confused some people are about the kind of copywriting I do.

You see, I recently sponsored the Copywriting Conference 2017 in London (#CopyCon17).

It was an interesting day, happily spent in the company of 200 or so professional copywriters.

You may well have been one of them.

If so, you may have even seen me doing my best impersonation of a professional conference attendee, loitering weirdly in the foyer.

I had the lanyard…

I had the roll-up banner…

I had the table covered in pamphlets for people to take.

Yes, I thought to myself: you’re the embodiment of conference cliché, Glenn. You’ve really made it now. 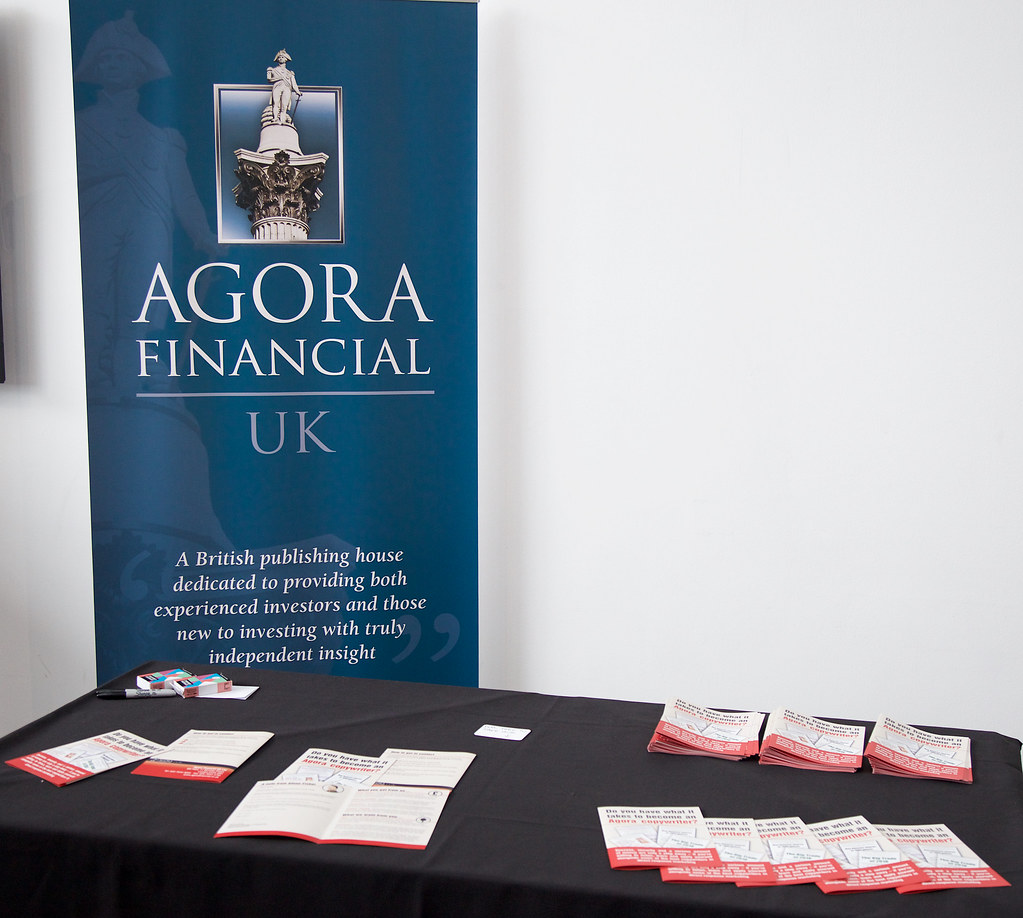 At the same time, when it came to explaining what I do, I kept noticing that people didn’t really seem to be aware that it was even a thing.

There’s a lot to unpack in that there sentence.

And on top of that, after the event, Leif Kendall, the director of ProCopywriters, got in touch to ask me to:

“…write something about the direct mail approach you use at Agora. It’s something that some of our members ignore (I think) because we’re generally more focused on social media and SEO.”

Write about the copywriting approach we use at Agora?

So, my dear reader and fellow copywriter… buckle up and let’s do this.

The only two types of copywriting you need to know

If I’ve learned one thing working in this copywriting game for over a decade, it’s this…

People are too quick to jump on the bandwagon with various industry buzzwords.

David Ogilvy would be rolling in his grave if he heard some of the nonsense that passes for insight in this industry.

That’s it. All you need. The rest is piffle.

And both, ultimately, serve the same function: to persuade a fellow human being to take action.

The only difference is that one is totally measurable and the other is a bit, well… ‘waffy’ is the word I’d use.

In fact, hold that thought, as we’ll need it shortly.

First, let’s get all ‘copywriting community workshop’ about it with a quick ‘takeway’…

TAKEAWAY NUMBER ONE: As a copywriter, you should stop trying to invent your own bloody SEO term to describe what you do and just figure out if you’re writing indirect or direct response copy.

Once you’ve established which camp you fall into…

The question remains: What’s this all got to do with the approach to copywriting we take at Agora?

We’re getting there; trust me, as this leads us to my next point of thought.

** Get the tape measure out

Whether you work in direct or indirect response…

Understanding how to persuade others to take action is the key to being a good copywriter.

You already know that.

But here’s the thing…

The best way to learn about what persuades people to take action is to work as a DIRECT response copywriter.

And, by all means, disagree with it if you like. (You’re wrong, but email me anyway at allgoodcopy@gmail.com with your opposing argument.)

It’s not just my bias…

The late, great Ogilvy himself – oh hallowed Lord of indirect copy – famously said he would only employ writers into his agency that had studied direct response for at least two years.

The answer is simple, and I imagine you shouting it at me as I type:

You can MEASURE direct response.

The clue, of course, is in the phrase: you are looking for a ‘direct response’ to your writing. If you get one: the copy works. If you don’t: it doesn’t.

There’s no waiting for a decision. It’s either now or not.

There’s no emotion in the decision. It’s either good or bad.

Not only is that liberating, it is, in my humble opinion, the key to making a lot of money as a copywriter.

Now, I should point out here that I am not in the slightest bit motivated by awards or people thinking my copy is ‘cool’. Couldn’t give a monkey’s on that front.

I am motivated to write copy that works.

Because if it works, it makes my client money and therefore it has the added bonus of making me money.

If it doesn’t work, I can analyse what didn’t work down to incredibly granular detail, fix it, and make sure I don’t make the same mistakes again.

With indirect response copy, you can’t do that. You can guess which element of your campaign didn’t work, but you never truly know – no matter how many focus groups you might hold.

This is the edge that I believe old school direct response copywriters – and specifically those who work with Agora – have in the market, which I’ll expand on in a moment.

But again, let’s get all ‘afternoon-training-course-in-the-city’ about it:

TAKEAWAY NUMBER TWO: Every writer who uses words to sell, regardless of the industry they work in, should spend some time studying the principles of direct response copywriting.

So, where are we and have I answered the brief?

We started with a loose description of me being an expert in “proper old school long-form direct response copywriting.”

I guess we can say the ‘proper’ comes from the fact that we define the two types of copywriting correctly. Instead of flapping about on the latest buzzwords, stick with those terms: direct or indirect.

We’ll say I covered ‘old school’ in that I define myself as a direct response copywriter and by doing so, summon the ‘old school’ spirit of the likes of Ogilvy and the ad men of old: Claude Hopkins, Eugene Schwartz, Gary Halbert.

So, let’s finish by picking up on that final and much-maligned phrase: long-form copy.

The secrets of the sales letter

Why in holy hell would I want to research and write a 10,000-word long-form sales letter when I can just steal a load of market research from Google, come up with a snazzy strapline that’s a little bit kooky and then slap Richard Brandon’s goatee on it?

Why go down a seemingly harder and out-dated route to copywriting success?

Well, I’m currently in the process of writing a book all about the long-form sales letter and how it can help anyone become a master copywriter. So, it seems a little silly to sum up what I’ve written 300-plus pages about in the closing section of a 1,700-word article.

You can learn everything you need to learn about how to persuade people in any format – be it a Facebook advert, a London underground poster, a PPC campaign, or a door-step flyer – by studying how to write long-form sales letters.

In learning how to write a long-form sales letter, you learn how to identify big ideas that connect on an emotional level…

You learn about what makes a truly attention-grabbing headline…

You learn how to structure an offer…

You learn about the importance of specificity…

You learn how to study your reader…

To any copywriter, young or old, brand new or deeply experienced, if you have haven’t before, I would urge you to study ‘proper old school long-form direct response’ copywriting.

Now, when I set out writing this piece, I thought I was going to talk about the fact that Agora is now bigger than companies like the Wall Street Journal and The Economist – all thanks to the fact that we market almost exclusively with direct response long-form copy.

But then I realised that’s kind of irrelevant.

The fact that long-form copy works from a business point of view is for a different discussion and another article.

Instead, when I think about the third and final takeaway I’d like to give you in this piece (the power of three and all that), I want to keep it simple…

TAKEAWAY NUMBER THREE: Learning long-form, direct response copywriting is good for your career as a copywriter, both in developing your ability to persuade and increasing your income.

When I think back to that hip, young copywriter who’s thinking about what ‘cool’ new angle they can take for an ultimately immeasurable advertising campaign, I can’t help flash forward to the tired, cynical person they’ll eventually become when they’re replaced by their younger self.

Someone who’s simply more hip, and has the wild suggestion of setting fire to Richard Branson’s goatee, an idea which is subsequently gushed-over by creative industry judges for its ‘daring perversion of a previously tired brand and reinvigorating it for the modern generation B consumer.’

That stuff’s just all a bit shit in my mind.

I’m biased. Let’s not pretend otherwise. But when I think about it, there’s something reassuring about “proper old school long-form direct response copywriting” and that’s why I would encourage everyone reading this piece to find out more about it.

You can do that in a number of ways…

First, read the greats – who are a damn sight more insightful than me. I mentioned a few before and they’re among the best: Scientific Advertising by Claude Hopkins. Breakthrough Advertising by Eugene Schwartz. And The Boron Letters by Gary Halbert. All great.

Second, you can read my rambling and messy thoughts on different elements of direct response copywriting each week via the free email I publish. You can visit AllGoodCopy.com to find out more on that.

Or thirdly, if you’d really like to get deep into the strange world of “proper old school long-form direct response copywriting,” and fancy coming to train with me as an Agora copywriter – you can reach out to me via the email I mentioned above: allgoodcopy@gmail.com

If you’ve got absolutely no interest in direct response long-form copy, I’ve failed to persuade you there might be something interesting here, or you’ve simply read this far purely out of some strange masochistic perversion…

Perhaps just get in touch to tell me what you thought of the new Blade Runner film. I thought it was pretty good.

Dear Glenn,
I think your article Direct response copy: why you should go old-school from 2017 was absolutely delightful. You caused me several giggles, at least one laugh, and gladly nothing to actually argue about. Thank you, you made my day!

Want a copywriting job? Here’s what I look for